For two weeks in January 2020, with fires burning across the country, over 300 singers came together to form treble and SATB choirs which include Gondwana Voices (treble singers, aged 10-17), and Gondwana Chorale (mixed choir, aged 17-25).  The singers participate in 5 rehearsals a day over the 10 period leading up to a series of 4 concerts as part of the Festival of Summer Voices. 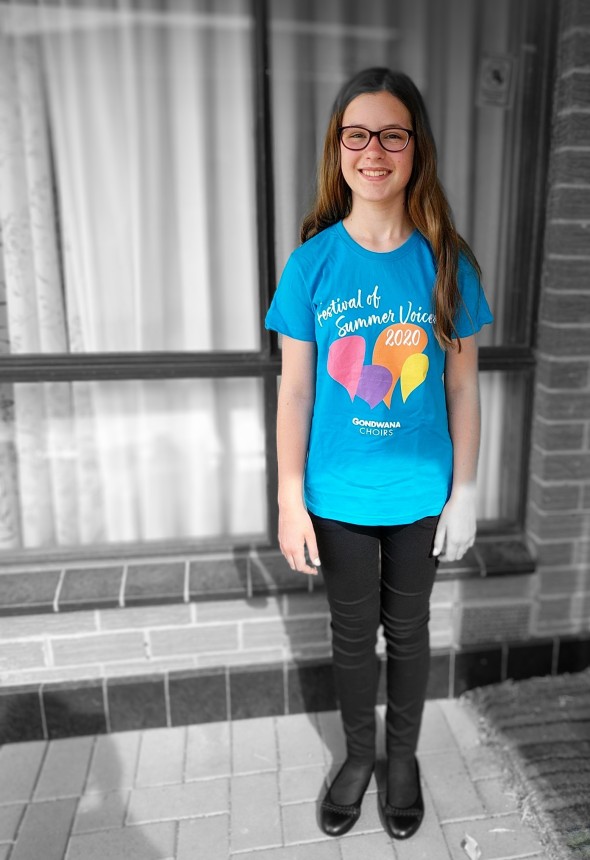 GYC Chorister Abigail Hodge McAvaney was selected to participate in the Gondwana Novus Choir for this amazing, immersive choral experience, and GYC Director of Music Denise Hollingworth attended the choral skills lab for choral conductors from all over the country.  Abigail’s family attended the four concerts in the Festival of Voices – the livestream of the final concert can be viewed on youtube and photographs and highlights from the National Choral School can be found on the Gondwana National Choirs Facebook page.

Director Lyn Williams (AM) wrote in the introduction to the Festival of Voices program:

“We are coming together in these particularly difficult times for our nation when our hearts are aching for our country, our families, our friends, our animals and our land which we love so dearly.

At such a time of danger and loss, it can be hard to discern the role that music can play.  How can singing a few songs have any significance? We know that music heals, and nowhere more so than the uplifting voices of the choristers of the Gondwana National Choral School.  Through our music, we offer our hearts to all those affected by bushfire.”

Many of the songs performed at the 4 concerts reflected care and concern for our planet, and the hope and expectation that we all need to act to help and heal our world and the creatures in it.  “We are watching”, a work commissioned and performed by the Gondwana Collective, used the words of Greta Thunberg, and featured dioramas of special places created by the choristers themselves.

The Guest Artist for 2020 was Lisa Young, founding member of the acapella group “Coco’s Lunch”, who wrote a commissioned work for the combined choirs entitled “Stepping Stones” – you can read more about this song for our times in this article from Limelight Magazine: https://www.limelightmagazine.com.au/features/gondwana-premieres-a-new-choral-work-about-climate-change/?fbclid=IwAR2HhyqvkpL3pfak_C4gAxdROfpFNYonc2R4bIE3jgalMQWUBegUq-PgyW0

Choristers also chose from a range of special electives of musical interest, led by an expert in the field. 2020 electives include consort singing, Suara Indonesia Dance, Peter Pan (creative development with Sydney Chamber Opera / scenes from a new children’s opera by Andrew Ford), Purcell’s Dido and Aeneas, Music of the Middle East, Gondwana in the Community, music media.

Why did you audition for the National Choral School?

‘I auditioned because I thought that it would be an amazing opportunity to continue my growth in singing.’

Tell us about the choir you sang with.

‘I sang with the Novus choir. It was a sort of training choir, and was formed recently. It was conducted by Kim Sutherland and Christie Anderson, and our pianist was Sally Whitwell.’

What kind of things did you focus on in all those rehearsals?

‘In session one, we would focus on warmups, mostly vowels. Session two would be more focused on some of the songs. Session three was our electives, session four was more songs and session five was either a combined rehearsal or activity (movie, quiz). It was a VERY rigorous schedule.’

Which were your favourite songs and why?

‘My favourite songs were “Look into the rain” composed by Sarah Evans (who was a composer academy participant and wrote this specifically for Novus choir 2020), “Talking to my shoe” – a Michael Leunig poem arranged by Paul Stanhope and “Dissolved” composed by Sally Whitwell. “Look into the rain” was a beautiful piece written to highlight that even though there are horrible problems in life, we can stand “with forty smiles” against them. “Talking to my shoe” was a hilarious piece based off a poem by Michael Leunig, which included phrases such as: the carpet died, a palm collapsed, the cat keeps doing poo, which resulted in many laughs from the audience. “Dissolved” was a piece describing the stillness of night swimming, and used beautiful harmonies to show the sound our choir could make.’

What were your conductors and accompanists like?  Did they have any funny traits or sayings? What did you learn from them?

‘Our conductors were absolutely hilarious, creating many phrases such as (and no one will understand these): “More wee less p”, “Going to Tahiti”, and others that I can’t think of right now. They provided a bright side to the constant singing.’

Which elective did you do? – tell us about it!

‘I participated in the Music of the Middle East elective, which was taught by Martin Al-Somery and Paul Jarman. It was extremely hard to pronounce the different letters, but we managed. We performed three songs: a popular love song, Male Shoghul Bel Soog and El Helwa De.’

What about your experience at Gondwana would you like to bring back to GYC?

‘I think just using the vocal training to help each other, and also a lot of the warmups could be used.’

What were the highlights of NCS for you?

‘A definite highlight would be the amount of friends I made, it’s a very open and friendly community and it was very accepting. Also learning from professional conductors and pianists.’

What were the challenges?

‘A challenge would have to be waking up before eight! But in all seriousness, I think some challenges were just meeting the expectations that were set out, and perfecting the songs to the level that we performed them at.’

‘I think the sound that was created in each choir was extremely beautiful, and I didn’t expect it to sound so rich and layered. It was incredible and the footage doesn’t do it justice.’

What would you say to someone considering auditioning for NCS in 2021?  Do you think other GYC choristers should give it a go?

‘I would definitely suggest it to other choristers, and I suggest that they should audition to the best of their abilities because it is amazing.’

‘I would LOVE to go again, it’s awesome and to meet people from all across Australia was very interesting, we all pronounced things in different ways or called the same things something else, it was quite weird actually.’

Friday 1st of May – GYC will be performing at Geelong After Dark!  Details to follow, but in the meantime, save the date!

Contact us to request an information pack and enrolment package